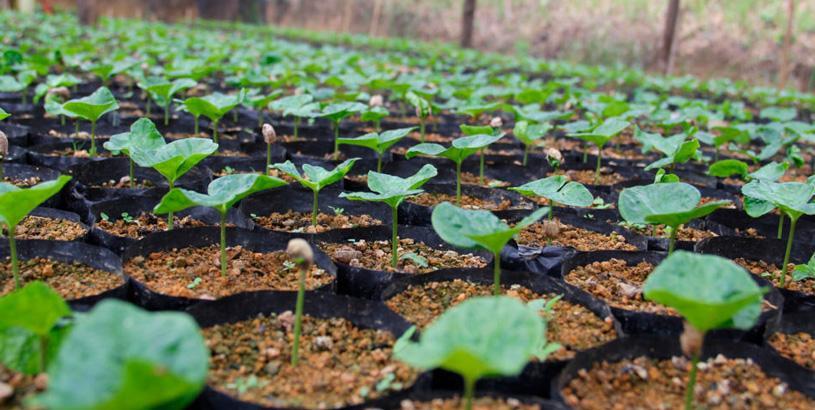 By Clear Lake Coffee Roasters
More from this author

An Officer and a Gentleman: The Story of Central American Coffee Part 2

Welcome to part two of the story of Central American coffee. Missed part one? Catch up here.

Our story continues after the coffee plant’s great escape from the Arabian Peninsula, it would not reach Central America for another 100 years, but it arrived in the Caribbean in half that time due to the stubborn efforts of a French Naval officer, Gabriel de Clieu.

In the early part of the eighteenth century, coffee was a luxury, relatively scarce and imported from far away and mysterious places. De Clieu had a plantation in the northwest region of Martinique, one of the Caribbean islands that rain down on South America from Puerto Rico. He knew the climate, where cocoa was thriving at the time, was right for coffee propagation, and he imagined growing coffee would make him a wealthy man.

The only place for de Clieu to obtain a coffee shoot in 1720 was the royal greenhouse of King Louis the XV (who was only 10 years old at the time), where coffee plants were kept that had been gifted to Louis the XIV by the Dutch. What to do? Although the stories of how de Clieu obtained a coffee shoot from the greenhouse differ somewhat, the best story might begin with these words: De Clieu knew a woman who knew a man.

That man was, in fact, a doctor —, and not just any doctor, but a royal physician named Chirac, who had access to the royal greenhouse where medicinal plants were grown. De Clieu convinced a woman friend to convince Chirac to give her a shoot from a coffee plant. Dr. Chirac did as the woman asked because, it is said, she was a person to whom the good doctor could never say no, for reasons history does not record.

Some versions claim de Clieu received three shoots from the royal greenhouse, but where’s the drama in that?

Obtaining the shoot was the easy part, it turns out. De Clieu had to build a small greenhouse of his own, plant the shoot, get it to grow into a sapling, then transport the plant, still inside the greenhouse, to Martinique, four thousand miles away. What could go wrong? Thieves, pirates, storms, poor wind, water rationing, all of these dangers were possible, but surely not all of them on one voyage.

According to de Clieu, the thief was a Dutchman, someone who would clearly understand the value of his cargo and expressed such open jealousy that the plant could never be left alone. De Clieu kept the plant with him at night and then took it on deck during the day. The night before the Dutch passenger disembarked at the island of Madeira, 500 miles off the cost of Morocco, he tore a branch from the plant while de Clieu was asleep, causing enough damage that the plant had to be carefully nursed back to health.

Then came the Barbary pirates who attempted to capture the ship. But the merchantman on which de Clieu was a passenger had an experienced captain who outmaneuvered and then outran the pirates. Unfortunately,  the evasive maneuvers were violent and the small greenhouse was broken. It was repaired, to the extent possible, by the ship’s carpenter.

Free of the pirates, the vessel was then set upon by a powerful hurricane, which not only caused the little greenhouse to break again, but exposed the soil to seawater. Some of the ship’s drinking water was also contaminated with seawater, so what drinking water remained was strictly rationed. The coffee plant did not receive a water ration. But so determined was de Clieu, he shared his water ration with his plant.

Sharing his water ration would be difficult, but not impossible, if the voyage could get back on schedule … if de Clieu were a luckier man.

Following the hurricane, the ship carrying de Clieu, his coffee plant, and limited fresh water, hit a dead calm. Brutal heat and no wind. De Clieu was already sharing his water ration with his coffee plant and the windless sea added days to the journey. For some time after his death in 1774, poems were written to celebrate de Clieu’s epic journey for the sake of coffee and ultimately the coffee drinkers of France. One poem in particular focused on this final tribulation. Note, in Greek mythology, Tantalus tortured someone by surrounding them with water but not letting them take a drink.

And still a heaven of brass inflames the burning hours.

With that refreshing draught his life he will not cheer.

But drop by drop revives the plant he holds more dear.

De Clieu, and the plant he held so dear, survived their encounter with Tantalus and landed safely if not soundly on Martinique. He planted his coffee baby in the garden where he could keep an eye on it, surrounded it with thorn bushes, and had a guard stand watch 24/7. His first crop yielded two pounds of seed, which he distributed for planting. Exponentiality ensued and by the time he died there were 18 million coffee trees on Martinique, coffee had spread throughout the Antilles and would finally arrive in Central America in 1779.

In 1827, the island of Martinique, somewhat like the voyage of de Clieu, suffered several calamities. First, there was what seems to have been a very significant earthquake, the ground ripping and sinking variety. Then there was a large hurricane and following the hurricane almost all of the cocoa trees that remained after the earthquake and flood died of disease. Virtually all cocoa plants were gone and coffee plants took their place.

It’s a story that could make a good movie, or a great episode of Drunk History. While much of the story of Gabriel de Clieu has likely been exaggerated (we rely on de Clieu’s journals for much of it), what can be said with some certainty is that de Clieu did bring a coffee plant, or plants, from France and his plantings were the progenitors of most central American coffee , including those countries that began commercial production first.

Clear Lake Coffee Roasters offers coffee from the three Central American countries that came later to commercial production of coffee: Honduras, Nicaragua, and Panama. Like all Centrals, these coffees were, at one time, considered interchangeable with one another but now have distinct signatures in the specialty realm.

Nicaragua was the first among the three to begin commercial production of coffee. Though commercial coffee growing began in Nicaragua at roughly the same time as Guatemala, the industry grew much faster in Nicaragua, becoming the country’s number one export in just twenty years.

Both Panama and Honduras did not begin commercial production until the late 1800’s. The late arrival of Honduras was due in part to the dominance of the banana industry, which requires little infrastructure compared to coffee. The growth of the coffee industry continued to be slow throughout the early twentieth century due to poor infrastructure and an absence of modern mills. Very little coffee was exported for decades, but Honduras caught up quickly and in 2011 was the largest producer of coffee in Central America.

Coffee came late to Panama, but Panama came early to specialty coffee. Coffee farmers understood that such a small country could not compete on quantity and decided to focus on quality. As a result, the production of coffee has dropped dramatically but the value of coffee has increased steadily. Emblematic of this transition is the emergence of the Geisha variety. Originally brought to Panama fifty years ago as potentially resistant to leaf rust, the plants did not thrive at low altitudes (where resistance was critical) and resulted in poor tasting coffee. In 2004, Geishas were discovered/rediscovered growing at high altitudes and exhibited such extraordinary flavor the coffees broke records at auction.

With an abundance of micro-climates and wide variety of terrain, coffee farmers throughout Central America learned that not all Central American coffees are created equal, not even coffees on the same farm. Despite the compact proximity of the coffee growing countries, the region produces a seemingly limitless variety of flavor profiles.