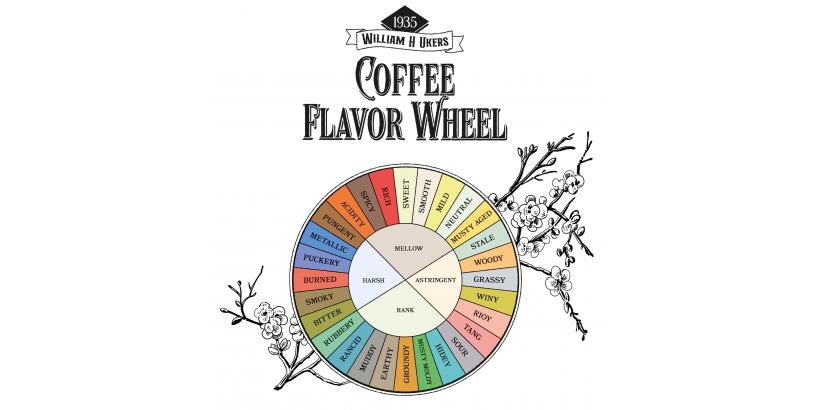 “Coffee doesn’t need a menu, it needs a cup, that’s all it needs! Maybe a saucer underneath the cup, that’s it!”

During his 1997 standup comedy special “Lock ‘N Load,” Denis Leary spent 8 minutes ranting about how complicated coffee was becoming during a decade that can be fairly described as experiencing a coffee retail boom. For much of the 1990’s, the number of coffeehouses in the U.S. was doubling every two years.

“Is it impossible to get a cup of coffee-flavored coffee anymore in this country? Huh? What happened to coffee? Did I miss a meeting with the coffee?”

Poor Denis. Coffee is certainly not less complicated 25 years later. It’s easy to imagine Leary taking a swing at anyone trying to explain to him the difference between yellow and black honey processing. At the heart of his complaints were all the words that were any word other than the word coffee.

“They got mochaccino, they got chocaccino, Frappuccino, cappuccino, rapaccino, Al Pacino. What the @#%&!”

Surpassing the ever increasing inventory of retail coffee words are the words we use to talk about how coffee tastes. The World Coffee Research Sensory Lexicon includes 110 flavor, aroma, and body attributes, and that’s just the “official” language, the words meant to mean the same thing for one coffee cupper as they do for another. When you say vanilla, I don’t say "vanella," I say vanilla too and so nothing gets called off. 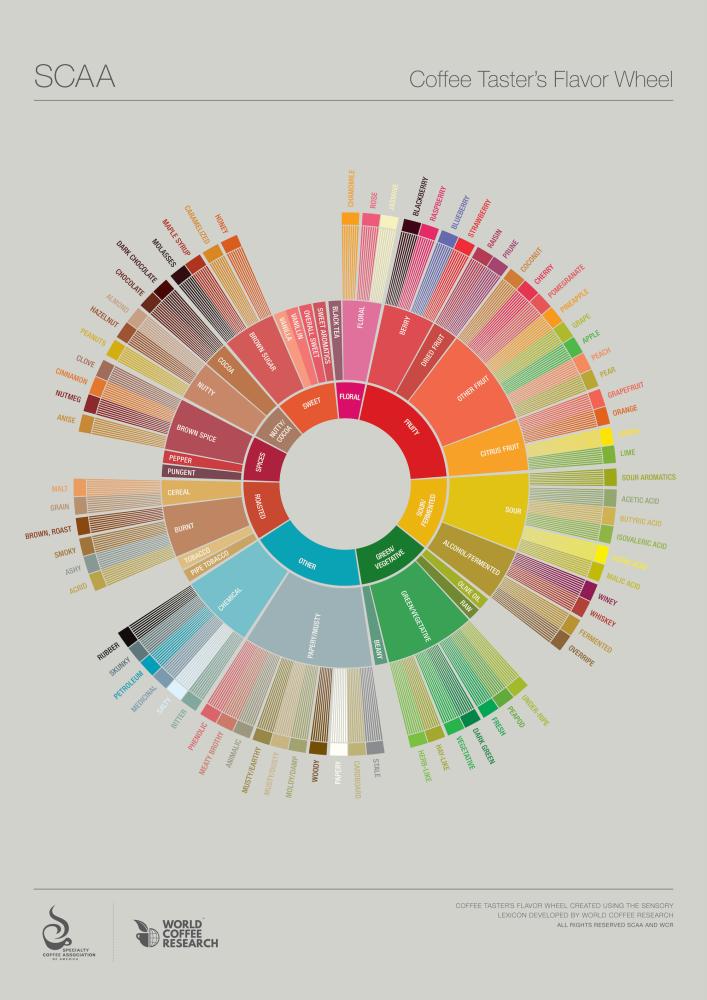 Beyond the formal lexiconic language are countless words found on thousands of coffee packages attempting to not only convey what the coffee inside will taste like but do it with unique specificity. If we taste raisin, maybe it’s actually golden raisin. Are you sure that apple note isn’t actually green apple, or green apple Jolly Rancher hard candy? Not fruit, not citrus, not orange … blood orange. Sure, chocolate, but is it dark chocolate, milk chocolate, white chocolate or maybe Cocoa Pebbles? It must make Denis Leary really really angry.

The evolution/expansion of taste descriptors—both formal evaluative words and the informal marketing words—is not purely a specialty coffee phenomenon. It’s been happening for a long time.

With few exceptions, prior to 1800 coffee literature rarely described the taste of coffee beyond the broadest terms, often just simply noting that coffee had flavor. But some words that still appear on coffee packaging and flavor wheels today can be found in Domestick Coffee-Man (1722) by Humphret Broadbent.

“If coffee be but very little too much boiled it is spoiled and grows either flat or sour.”

“Some make coffee with spring water, but it is not so good as river or Thames water because the former makes it hard and distasteful, and the other makes it smooth and pleasant.”

“This strong coffee was made by adding three ounces of coffee powder to a quart of water.” 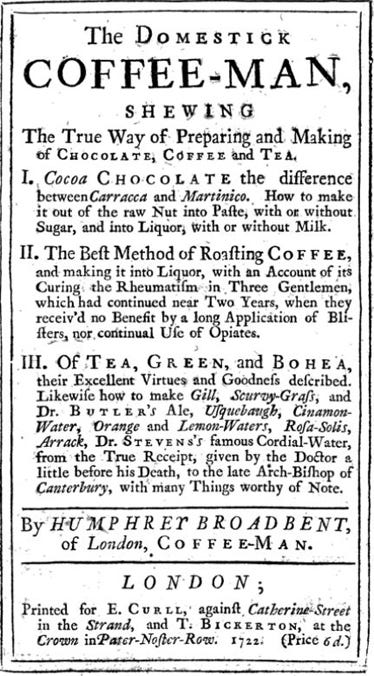 In A Treatise Concerning the Properties and Effects of Coffee by Benjamin Moseley (1792), almost the only specific taste descriptor used is “bitterish.” The coffee from a failed planting experiment in Dijon France in 1670 is said to be “tasteless and insipid;” and new coffee (i.e. not aged) is described as “coarse and rank.” These sorts of words are helpful the way a compass is helpful, but not very meaningful, like a map. Usually, the taste of coffee is described in the most general terms. Coffee, according to Moseley, could taste:

More words are used to describe the physical effects of coffee, some real and some dubious, than are used to talk about taste. The list of medicinal uses for coffee is much longer than any list of flavor descriptors, even if all the non-descriptive words like “excellent” were included. But that was more or less the purpose of the book as the author was a medical doctor. Here, for example, he writes about how coffee can help you with your opium habit.

“Confirmed by many observation, I believe that coffee, besides being the best corrector of opium, is the best medicine to alleviate the mischief it produces, that has yet been discovered, and that the operations of common doses of opium may be checked by it almost at pleasure.” 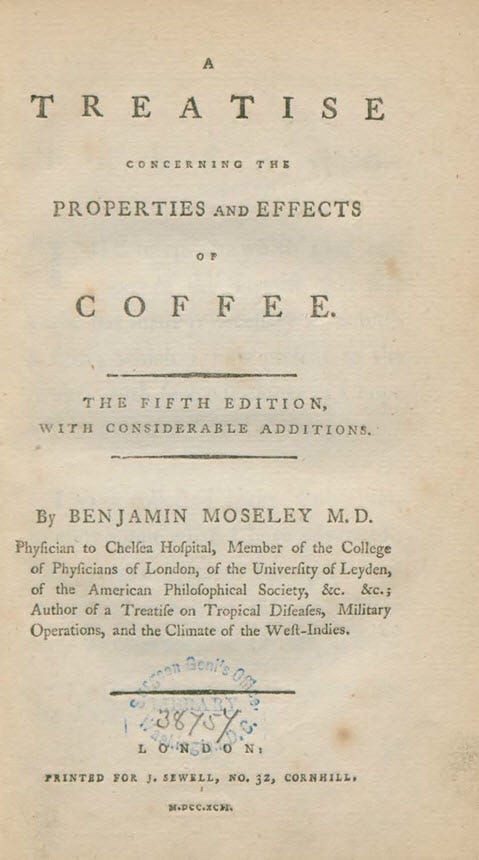 In Coffee Planter of Saint Domingo (1789) P.J. Laborie also writes about taste in vague, non-descriptive terms. For example, after noting that coffee cherries should be picked when ripe, he explains the practical compromise of picking coffee that is not quite ripe.

“Such coffee may perhaps be less perfect in taste but does well at the mill and I never perceived it to be different in the quality required at the market.”

The phrase “less perfect in taste” has never appeared on a coffee flavor wheel. Nor has  “preferable in taste,” which is how Laborie describes the taste of cherries allowed to dry on the tree, adding that this is, nevertheless, a bad practice because it harms the trees. 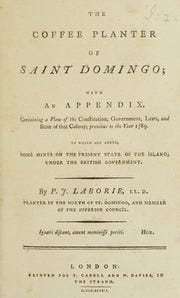 By the mid-19th century we begin to find more familiar and specific taste descriptors in the coffee literature, words that would have long careers as coffee adjectives. In The History of Coffee, Including a Chapter on Chicory (1850) by William Law, it is explained—the author’s thesaurus opened to the word beverage—that “One person prefers a high-colored infusion, another prefers a very bitter decoction, a third delights in a rich, soft, full liquor, a fourth prefers a thin, light, and airy potion, a fifth endeavors to seize a highly aromatic cup, mild and not bitter, rich but not syrupy.”

All of these words would be used by the coffee industry, with increasing formalization, well into the 20th century; and the habit if not the practice of being specific when describing negative flavor attributes, and vague when describing the positive flavor attributes, was established. It was born of necessity because coffee was valued primarily on its appearance and the absence of negative flavors. So, like previous writers, Hewitt used broad terms like delicious and delightful to describe good coffee, or more to the point, coffee that is not bad. 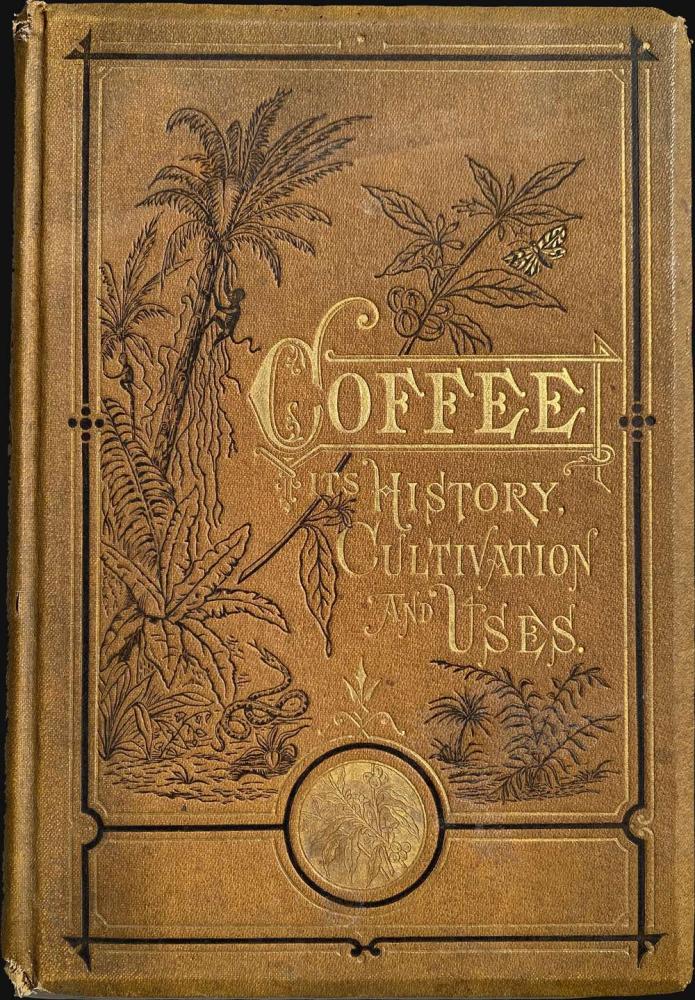 Just nine years later, in 1881, Francis Thurber expanded on the more specific coffee tasting vocabulary significantly in Coffee From Plantation to Cup. While the flavor attributes remain mostly negative, a few positive words in addition to the once all encompassing “mild” sneak in: 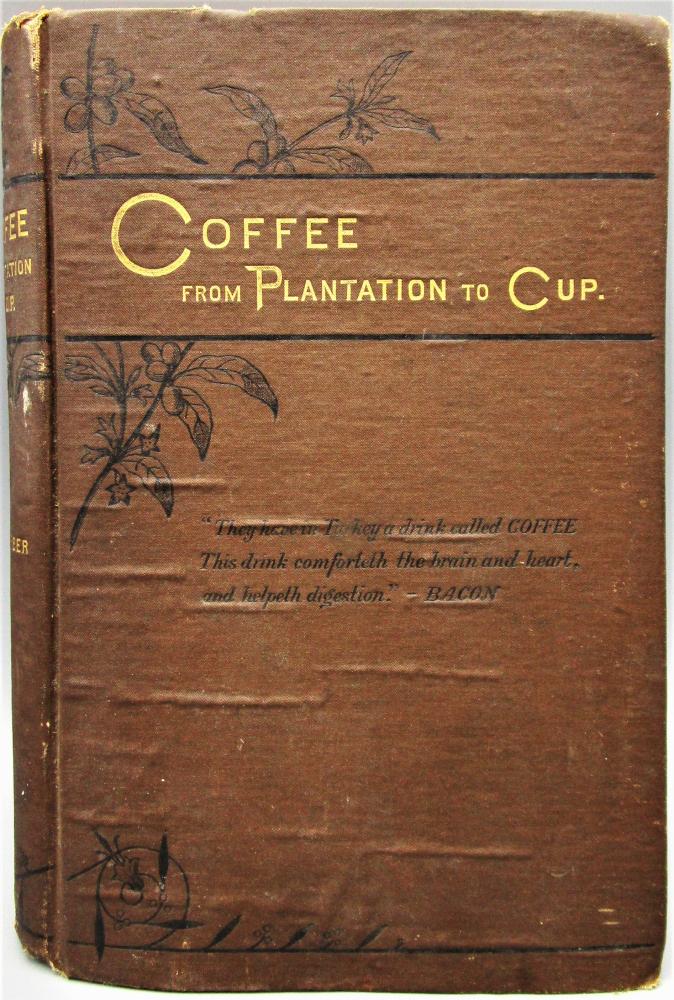 Around the same time Thurber was writing (his book would go through several reprints over 20 years), cohesion was coming to the coffee industry along with rapid innovation. During the 50 year period from 1875 to 1925:

Not Inventing the Wheel

This period of growth, invention, and organizing as an industry was punctuated by the publication of All About Coffee in 1922.  Written mostly by William Ukers, editor of The Tea and Coffee Trade Journal, the book was vastly more comprehensive, and more pedantic, than previous attempts by U.S. authors to write about coffee. Because coffee cupping, usually referred to as “cup-testing” at that time, was then well on the road to becoming standardized as an evaluation practice, Ukers provided a great many more taste descriptors than previous writers. Relative to terms used by previous writer, if not to our specialty coffee ears today, Ukers' were more specific, providing both compass and map. By the time he published the second edition in 1935,  coffee cup-testing had become coffee cupping, the procedure was even more standardized, and Ukers had added a few more words to his lexicon of coffee tasting terminology. 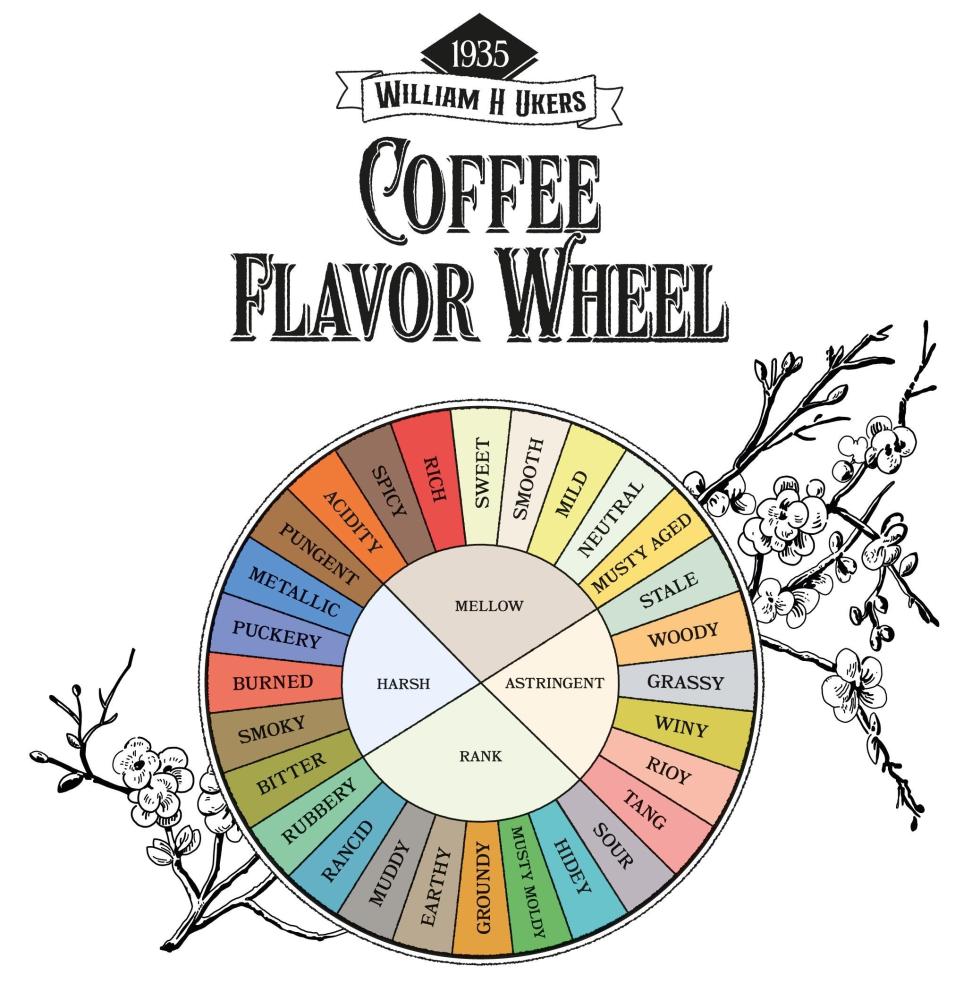 Specialty coffee is defined as having distinctive attributes that give it more value in the marketplace, and most of those attributes are positive flavor components. But, as we’ve seen, for much of coffee history, quality was defined simply by the absence of negative flavors. Although every tasting note that appears on this flavor wheel can be found in the 1935 edition of All About Coffee, the wheel itself and its organization are completely imaginary. Ukers would not recognize this wheel, but he would recognize all the words that appear on the wheel as descriptors used for coffee cup-testing 100 years ago.

Today, flavor wheels can be found for almost every product requiring sensory evaluation; but in 1935, the first flavor wheel (for beer) was still forty years in the future. The science of coffee had made great progress in the decade proceeding the 1935 edition of All About Coffee, but formal sensory science of any kind, let alone for coffee, was in its infancy.

There was certainly no clear science or organization behind the coffee flavor notes being used at the time. Some of the words were defined, but their relationship to each other was not. Some descriptors were used interchangeably and some appeared to have more than one meaning based on context. Musty could be bad in the context of moldy, or good in the context of "mellowed with age." While it’s true that Ukers would not recognize this flavor wheel—and might not agree with how it is organized once he understood the concept—he would likely have a tasting context for each word on the wheel, perhaps even memories of drinking certain coffees.

Strolling down the grocery store coffee aisle, we find antique descriptions of taste such as mild, rich, and the 300 year old “smooth.” While many of the non-descriptive descriptions from coffee’s past are no longer used in specialty coffee, even for marketing, some survived long enough to appear on early iterations of coffee tasting flavor wheels. Old words: mellow, harsh, delicate, were only set-aside in recent years as not holding enough meaning. Others, like woody, rubber, and stale have made comebacks.

One can be certain that Denis Leary (or, at least, his stage persona from the 1990's) would not be impressed with any version of a coffee taster's flavor wheel unless, of course, it only included the one word alone: "coffee." 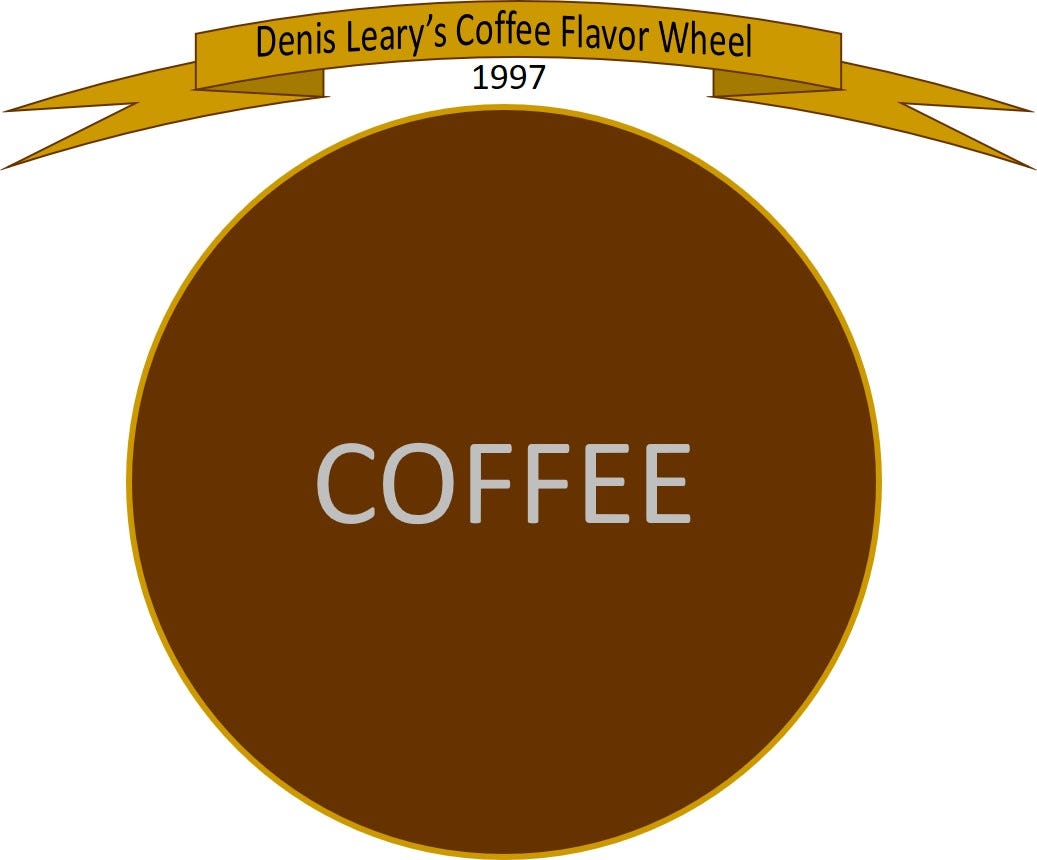