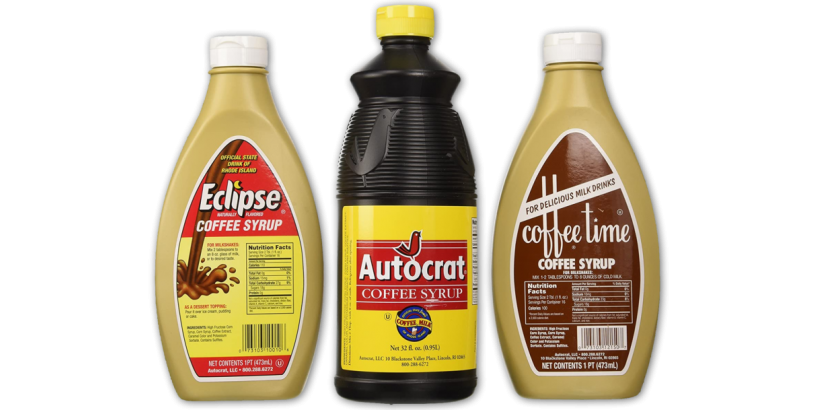 The Mystery And Majesty Of Coffee Milk

Once upon a time in Rhode Island, the boss for all New England organized crime lived and Godfathered in the city of Providence. The story goes that he and his cigar ran the third-largest crime family in the United States from a lawn chair outside a vending machine shop in Federal Hill, one of the city’s predominantly Italian-American neighborhoods. But you didn’t hear it from me.

Organized crime no longer dominates Providence. But a more enduring legacy has come from this neighborhood, in the form of a law, still on the books, that would have never been enacted if it were not for the arrival of Italian immigrants at the dawn of the 20th century.

Chapter four of Title 42 in Rhode Island law covers “State Emblems.” Rhode Island has 18 state emblems and most of them are what you might expect: flag, song, tree, bird, flower, fruit. A few are, perhaps, unexpected, like “state symbol of American folk art,” or “state shell.” Located between the state flagship and the state fish is emblem 15, state drink. Title 42, Chapter Four, Section 15 of Rhode Island law states, in its repetitive entirety:

“Coffee milk is hereby designated as the official state drink for the state.”

When it comes to state drinks, these United States are not very original. First, only around 30 states (counts vary) even have official drinks and in two-thirds of those, the official beverage is… milk, likely a nod to the importance of local dairy industries. The remaining state drinks are a mix of juices and soda pop, rounded out by strong showings from Alabama and California, whose official drinks are whiskey and wine, respectively. The official state drink of Indiana is water, tea in South Carolina, and Kool-Aid in Nebraska. We must forgive them; Kool-Aid was invented in Nebraska, and if you want to be precise about it, Kool-Aid is the state “soft drink.” The state beverage is…uh, milk.

Nebraska notwithstanding, and setting aside the thought that we might just be talking about flavored milk here, Rhode Island has the most interesting state drink if only because it includes coffee. But there’s a good chance you’ve never heard of coffee milk. Outside of Rhode Island and southeastern Massachusetts (where someone less diplomatic than me might say they suffer from Rhode Island envy), coffee milk is not really a thing.

Simple to make but not a simple story. To be both simple and complicated—maybe even contradictory and “hidden” at the same time—is quintessentially Rhode Island. These are fundamental attributes of my beloved adopted state.

Rhode Island is the smallest state in the Union (if every state was the same size as Rhode Island there would be over 3,000 states) but until recently had the longest name. The smallest state also has the shortest state motto, just one word: Hope. It’s a commodity here, hope is, and historically a necessity because Rhode Island spent most of its early years hoping Massachusetts wouldn’t invade to clean up what the Plymouth rockers, in their puritanical zeal, considered to be the garbage can of New England. Our state has been called worse.

Like coffee milk, the founder of Rhode Island, Roger Williams, is not very well known outside the state but is considered by some, with good reason, to be the author of the American soul. Upon founding Providence, Williams created what was arguably the first true democracy in the world featuring a clear separation of church and state and aggressive religious tolerance. When he first paddled his canoe into what would become Providence, the Narragansett Native Americans greeted him with the oddest mix of old English and their own language, Algonquin: “What cheer, netop,” they said.

A rough translation of this multi-lingual greeting appears on cans of Narragansett beer today (the beer Captain Quint was drinking in the movie Jaws), brewed locally for 130 years: “Hi Neighbor,” is what the Narragansett were saying to Williams. Probably, you’ve never heard that story. Probably, you’ve never heard of Roger Williams. Probably, if you’ve ever heard of coffee milk, it is only because you live hereabouts or because you’re coffee people and everything coffee eventually catches your attention. Outside of New England, ask 10 people about coffee milk and you’ll get seven or eight blank stares.

Despite over 350 years of commitment to “openness,” Rhode Island seems to exert some type of centripetal force that keeps certain things to itself. Nearly 150 years after Roger Williams set down in writing, repeatedly, principles upon which America would be founded, he was virtually unacknowledged by the founding fathers of America, though they paid homage to John Locke, who studied the writings of Williams and often quoted him verbatim. Indeed, Williams has been called the “forgotten founder” of America. It’s almost as if Rhode Island is just too small to register in the greater consciousness of America, like everyone stops listening as soon as you say, “Rhode Island” because whatever comes after must be inconsequential. And yet, the state that offers no apologies for being called an island when it’s not an island, clearly has no inferiority complex. Rhode Island just doesn’t care what you think. Never has. We put a little sugar-laden coffee concentrate in our milk sometimes. So what? It’s this thing that we do.

Let’s say you’ve cold-brewed a half-gallon of coffee concentrate. Just add sugar for, I don’t know, the entire time it takes you to read this article, and you basically have the coffee syrup used to make coffee milk. A mere two tablespoons of coffee syrup, all on its own, without the milk, delivers 100 calories, 26 grams of carbohydrates, and 21 grams of sugar. Add milk and it’s basically ice cream. The absolute defining characteristic of coffee milk is that it’s sweet to a degree that is addictive and wicked good. To me, it tastes like frosted corn flakes. To taste coffee milk is to like coffee milk. You don’t really have a choice. What’s not to like? It’s milk. It’s sugar. It’s coffee. In that order. If we’re being honest about it, this is the combination of ingredients that launched the retail segment of the specialty coffee industry, so it shouldn’t come as any surprise.

While there is stunningly little information about the precise origins and development of coffee milk, most people who think about such things seem to agree that it came out of the Italian-American community in New England following waves of immigration at the end of the 19th century and early 20th century. At that time, opportunities for immigrants in New England, and Rhode Island, in particular, were connected primarily to the textile industry, which helped the smallest state become a powerhouse during the industrial revolution of the 19th century, but it was always a quiet power. A hundred years later, if you asked anyone to name the top three most powerful cities in terms of organized crime, it’s likely everyone would name New York and Chicago, but few would name Providence, which occupied the number three spot. So why doesn’t the whole world know about coffee milk? Maybe we just don’t feel like we need to talk about it.

The first generation of any given wave of immigrants are usually working class, and one theory speculates that coffee milk emerged as a way to make use of spent coffee grounds among Italian immigrants. If you decrease the water to coffee ratio and increase the steeping time you can achieve a syrupy extraction from used coffee grounds, but you’ve moved into the bitter solubles. The most ancient cure for bitterness is, of course, sugar. Let’s just toss a bunch of sugar into our recycled coffee grounds while it’s steeping to soften the edges.

After a few decades as a home recipe, coffee milk moved into the mainstream, becoming a staple at New England soda fountains where each “soda jerk” no doubt developed their own methods for creating a syrup, moving to fresh rather than spent grounds, probably boiling the concentrate afterward and, at that point, not being shy with the sugar. The beverage became so popular that the Silmo Packing Company in New Bedford, Massachusetts, began to bottle coffee syrup. Silmo is usually credited with being the first to manufacture coffee syrup, but if you snoop around, you’ll find that D. Abelsen & Sons, located in Providence, beat them to it by a few years with their “Abelsen’s Arabian Coffee Syrup.” Rhode Island’s Eclipse Coffee Syrups began distribution in the late ’30s and in the 1940s, the Rhode Island company that would become synonymous with coffee milk, Autocrat, began producing a coffee syrup that would dominate the market for nearly 50 years.

Autocrat acquired Eclipse around 30 years ago, just before coffee milk was named the “official state drink for the state” after a modest political tussle (the official state sport) but has continued to manufacture and market the Eclipse brand in addition to Coffee Time syrup. Regardless of what brand you pull off the shelf, the ingredients of the syrup remain sugar, sugar, and coffee; or, if you are a born and bred Rhode Islander, sugah, sugah, and covee.

The packaging for all three brands is a little anachronistic, throwback design styles that are unintentionally hip now. It’s impossible to buy a bottle of traditional coffee syrup in Rhode Island without feeling like you are engaging in a nostalgic act, maybe even an act of loyalty to a time and a place that has started to fade away. There are new and, by almost any objective standard, improved players in the market, like Morning Glory and Dave’s, with ingredients that are a lot less Buddy the Elf sugar-centric and more focused on the quality of the coffee. To each their own.

All I’m saying is, we’ve got your coffee milk right here, and we don’t need to talk about it, this thing that we do.