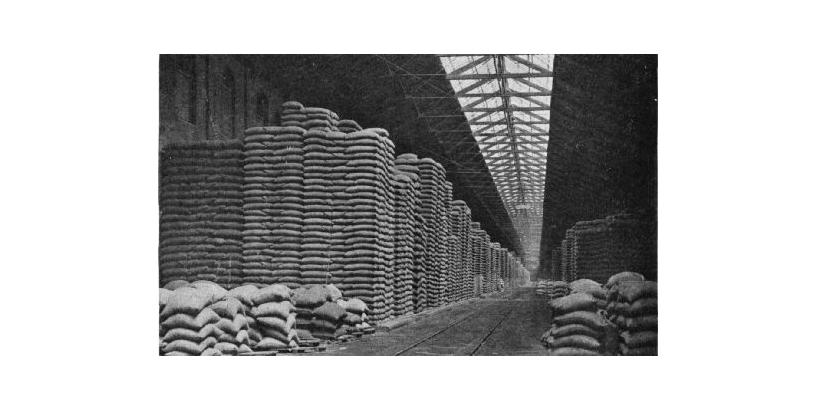 Among the first questions all roasters have about the journey of green coffee is, when will the journey end? When, oh when, will the coffee be here? These days, with the demand for both shipping containers and truck drivers outpacing supply, the answer can be uncharacteristically speculative.

Specialty coffee roasters are also interested in the beginning of the journey, the harvest dates. Coffee traders and roasters have always been interested in harvest dates, but for most of coffee history that interest had more to do with inventory planning than it did with ideas around freshness. Harvest dates were only important in relationship to arrival dates and, in the past, roasters wanted more distance between harvest and arrival, not less.

This might sound foreign—blasphemous even—to specialty coffee roasters who think about coffee in terms of its seasonality and “current” or “fresh” crop, but a widespread emphasis on the seasonality of green coffee is a relatively recent development. In fact, 100 years ago, it was thought that all green coffee improved with age and aged coffee received higher prices.

The Eppens, Smith Company, Washington and Warren streets, New York, has some choice lots of Sumatra coffees to offer and also some unusually fine dark brown Kroes. They can be had either on the spot or afloat. This firm also received a shipment of fine Timors. They are well aged and the brownest that have been received here for years. These coffees were three and a half years in transit from the East Indies to New York. The unusual delay was due to the war.

The coffee should be sufficiently aged to have mellowed and this would be indicated by the color, either yellow or brown.

That green coffee improves with age, is a tenet generally accepted by the trade. Were it not for the large capital required and the attendant prohibitive carrying charges, many roasters would permit their coffees to age more thoroughly before roasting. In fact, some roasters do indulge this desire in regard to a portion of their stock.

By 1935, when the second edition of All About Coffee was published, any hint that all green coffee improved with age had vanished from its pages, although many more examples of aging some coffees for some buyers were discussed. During the 13 years between the two editions, the coffee industry had experienced significant advances in the science of coffee, including standardization and growing acceptance of the procedures for cupping. The 1935 edition contained seven more pages on science than the 1922 edition, and aging coffee to improve taste had gone from a practice that could be “indulged” in with most if not all coffees, to a practice applicable to only a select few, like Santos, Bucaramanga coffee from Colombia, some Mexican coffees, and of course Sumatra, which remains a common aged green coffee today.

It’s important to understand that there is a difference between aged coffee and old coffee. Coffee is aged with intention and, when done right, with care. Even 100 years ago, coffees aged under certain conditions were prized over coffee that had just simply been around for a while.

Up to 1915 it was the custom to ship considerable Java coffee to New York in slow-going sailing vessels … Java coffees "ex-sailing ships" always commanded a premium because of the natural sweating they experienced in transit. It usually took from four to five months to make the trip from Padang or Batavia to New York. In the hold of the vessel the cargo underwent a sweating that gave to the coffee a rare shade of color and that, in the opinion of coffee experts, greatly enhanced its flavor and body. The captain always received a handsome gratuity if the coffee turned "extra brown."

How the accepted wisdom came to be that green coffee improves with age is unclear, but one can imagine.

Prior to slave revolts in the Caribbean Islands at the end of the 18th century and beginning of the 19th, the “West Indies,” were the largest coffee producing region in the world. As slave-labor dwindled, so did coffee production. At the same time, coffee consumption was growing rapidly in the United States. Brazil was growing around 25% of the world’s coffee 200 years ago but was virtually the lone exporter of coffee in Latin America. Most coffee consumed by most Americans at that time was coming from the other side of the planet, from Indonesia or Yemen. Just by virtue of how long it took coffee to get to the United States from those faraway lands, and the conditions under which it traveled, the “much-prized yellow matured coffee” was the default rather than the intention. Aged coffee came to be prized because that was normal. That’s what coffee was, what people expected coffee to look like and taste like. Even as more countries closer to home began to grow and export coffee, and steamships made the planet smaller, people expected raw coffee to have that yummy yellow hue and mellow musty taste. Java and Mocha and, of course, the famous Mocha-Java blend became synonymous with coffee.

By the end of the 19th Century, much more coffee was labeled Mocha, Java, or Mocha-Java than was actually being exported from those origins; and, importers had developed methods of artificially aging coffee that was too green to give it that months-on-a-boat look. The pure food and drug act made mislabeling illegal but the industry continued to work on artificially aging coffee to give it that Java-like or Mocha-like flavor. The 1922 edition of All About Coffee lists seven different methods for artificially aging green coffee. Just 13 years later, the 1935 edition mentions zero.

Between the wars, it seems the coffee industry realized the emperor was not wearing any clothes, that age did not necessarily improve the taste of green coffee. It seems reasonable to consider this change was driven internally by science and the standardization of cupping (note, the 1935 edition of All About Coffee included a dictionary with tasting terminology whereas the 1922 edition did not), and externally by changing consumer preferences following access to better coffees from Central America.

Green coffees, from Indonesia in particular, continue to be intentionally aged, not because aging is improving the flavor profile per se, but because there endures a market for the flavor profile that results from aging. To be sure, it is not everyone’s cup of coffee.

The fact that intentionally aged coffee still has a market may help us reconsider the role of unintentionally aged coffee. Maybe you bought too much coffee or maybe you bought the right amount of coffee in the wrong year or maybe as you work hard to grow your business, higher prices mean you’re perusing past crop. First, it’s helpful to begin by reframing how you think about past crop. It’s no use comparing older coffee to its younger self. People can often withstand such comparisons by gaining in wisdom and character. Wisdom is not a flavor, however, so it can be helpful to think of aging as coffee beginning a new role. Don’t ask, “What can we do with this past crop?” Ask instead, “What will be this coffee’s second act?”

Approached in this manner, you may discover that a coffee’s second act is just as valuable as its first. Lead actors are great, but everyone loves a well-executed ensemble piece. More than likely, a coffee’s second act will be to become part of a blend and like an ensemble on stage or in a movie, the sum is greater than the parts. There are no movie stars in an ensemble, there are roles. Second act coffees can anchor a blend or provide emphasis or accents to other components.

Unlike the industry 100 years ago, we know age is not an improvement, but neither is it a death sentence. Age is change but change is as much an opportunity as it is a challenge. There’s no reason to dismiss past crop coffee, whether it’s on your shelves or ours.